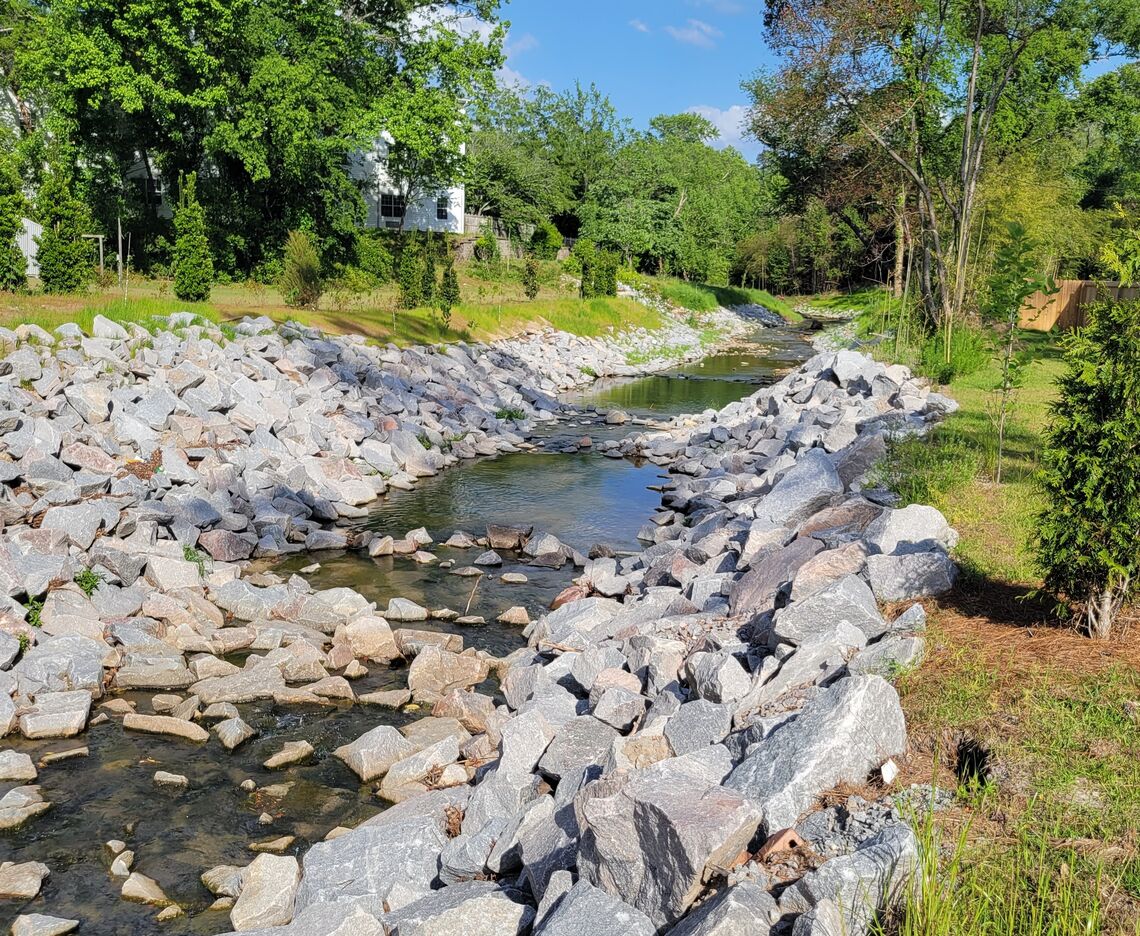 McCormick Taylor provided technical consulting support to the City of Columbia for the rehabilitation and
stabilization of portions of Penn Branch along approximately 6,050 linear feet of channel.

The project limits were from Woodlake Drive, where Penn Branch joins Lake Katherine upstream, to Brentwood Drive. Within these limits, approximately 4,000 linear feet of Penn Branch was confined by vertical masonry walls consisting of sidewalk pieces that were removed from downtown Columbia in the 1960’s and stacked along the banks forming retaining walls. The channel bottom in this area consisted of natural bottom, rip rap rock, and concrete. Beginning 450 feet downstream of Trenholm Road, Penn Branch consisted of 2,000 linear feet of eroded, vertical sloped, natural banks that are undercut and encroaching on private property.

Portions of the stream channel masonry walls were deteriorating and had either begun to fail or already
failed. A combination of several deteriorating mechanisms resulted in the wall failures including erosion at the toe of wall, deterioration of the joints, and failure of the earth behind the wall. The conditions of these walls likely worsened as a result of the 2015 floods. Trees and other woody vegetation grew up along these walls, which further compromised their integrity. In the areas of wall failure or potential failure, the walls were repaired (areas of scour filled with grout, trees removed, joints mortared) or replaced with modular block walls or poured in place soldier pile retaining wall, depending on the location, severity, and extent of failure.

The purpose of this project was to evaluate various channel stabilization methods to repair failing stacked masonry retaining walls and eroding earthen slopes that confine Penn Branch and select an alternative that resulted in minimal impacts to adjacent property owners and no increase in the water surface elevations and Federal Emergency Management Agency (FEMA) floodplain elevations. McCormick Taylor developed the hydrology and hydraulics for Penn Branch as well as an evaluation of the hydraulic shear stress and velocity. Topographical survey data with all stormwater infrastructure, channel geometry, and property boundaries were also obtained. Because Penn Branch serves as the property boundary for five properties (one commercial, four residential), close coordination with each property owner was facilitated. Meetings were held often with adjoining property owners to ensure all needs were being addressed and they were aware of the project schedule.

As the design phase was nearing completion in fall 2020 during the easement acquisition phase, a large portion of the stacked masonry wall downstream of Trenholm failed and collapsed into the stream. Because this collapse blocked flow within the channel and resulted in a compromised remaining masonry wall, including a 12-foot-high portion of wall that ran adjacent to a commercial property, it was clear that this portion of the project had to be expedited into construction.

Due to the failed retaining wall blocking the stream channel, an expedited construction schedule was critical. To shorten the traditional procurement time-frame, the project was advertised as an emergency project to several contractors that had extensive history working with the City on complex projects in environmentally sensitive areas. By utilizing emergency procurement procedures, the procurement time-frame was reduced from several months to only a couple weeks. The project was advertised in winter 2020, awarded one month later, and work commenced in spring 2021. The project was completed in fall 2021.