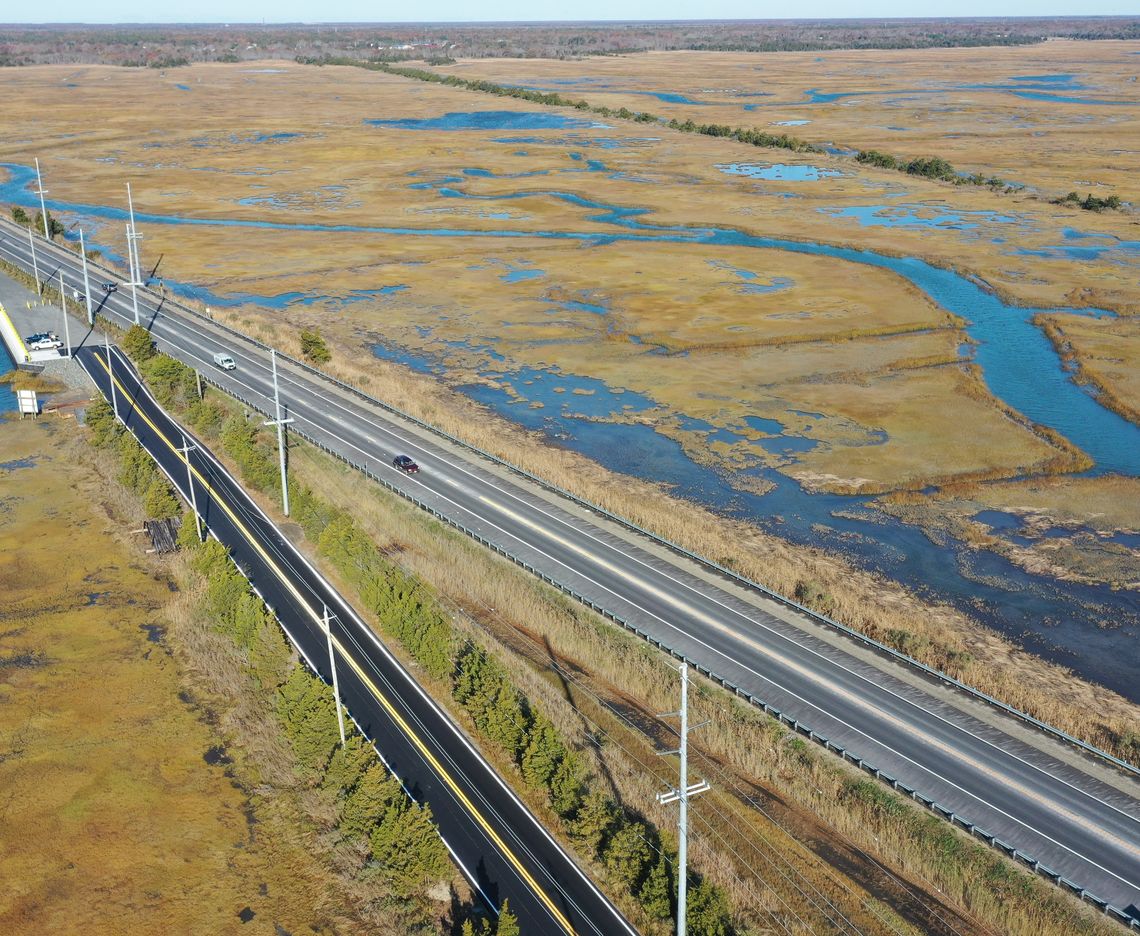 Sea Isle Boulevard, the main entryway into Sea Isle City, runs for about 1.7 miles through an expansive brackish estuarine wetland complex, proceeding from the Garden State Parkway Interchange 17 to the western approach of the Ludlam Thoroughfare Bridge that connects to

Sea Isle Boulevard is a designated Coastal Emergency Evacuation Route that has experienced tidal flooding during storm events with less than 100-year magnitude. This project addressed resiliency by raising the roadway to accommodate flooding events along an emergency evacuation route.

McCormick Taylor completed the final design of this multi-year roadway reconstruction. The roadway was elevated on fill by approximately four to five feet to be above the 100-year flood elevation while maintaining the existing toe-of-slope and right-of-way. Three existing tidal equalizer pipes crossing beneath the roadway were replaced at their same locations with larger pipes to improve tidal rushing and wildlife passage.

A small connector roadway between Old Sea Isle Boulevard and Sea Isle Boulevard underwent minor reconstruction to improve access to the Sunks Creek Bulkhead Public Access Area and an off-site marina. The bulkhead along Sunks Creek was replaced with a new vinyl sheeting bulkhead, repositioned no more than six feet landward of the existing bulkhead. When the bulkhead work was complete, public access site improvements were constructed, landward of the new bulkhead, enhancing recreational opportunities at this location.

The estuarine wetland complex adjacent to Sea Isle Boulevard is considered critical habitat for a large population of northern diamondback terrapins. In response to concerns of the U.S. Fish and Wildlife Service, approximately four miles of turtle exclusion fence was installed along all proposed guide-rail upon the roadway’s top-of-slope, which effectively eliminates high terrapin mortality caused by motor vehicle encounters on the roadway. The tidal equalizer pipe replacements also provide enhanced opportunities for terrapins to cross Sea Isle Boulevard without entering the roadway.

A protected turtle nesting area was also provided as part of the Sunks Creek Bulkhead recreational site improvements. The improvements to the Sunks Creek Recreation Area include a fishing area, paved parking areas, new ornamental railings along the bulkhead, bollards, and a portable restroom. The existing wooden bulkhead was replaced by a new fishing pier that will become a treasured hangout for anglers, crabbers, and nature lovers.

Sea Isle Boulevard was completed a year ahead of schedule and elevated the designated Coastal Emergency Evacuation Route by approximately four to five feet to be above the 100-year flood elevation while maintaining the existing toe-of-slope and right-of-way.